With my move to Devon, I'm staring to take more of an interest in South West edge tool makers, and local pattern tools. Devon and Somerset had several edge tool makers, and as well as supplying the agricultural and forestry markets these also tended to serve the mining and quarrying industries.

One maker, A. Morris & Sons of Dunsford in Devon, is still manufacturing edge tools, run by Richard Morris. Among the better known of the rest, Fussell of Mells and Nunney, Somerset, became part of Isaac Nash in 1894, Finch Bros. of Sticklepath, Devon, closed in 1960, after a roof collapsed, and Knapman of Hill Mill, Harberton near Totnes, closed in 1954, but tools from all these makers are still in use here and there.

The South Western edge tool types are distinctive, and tend to have a more pronounced curved beak or nose than most others, often ending in a blunt, cropped end. Another common feature is a notch in the blade just by the handle. This feature is often considered a mystery:- why is it there, how did it originate? The only light I can throw on this is that a few 20th C photographs show hedgers using a leather guard or boot (sometimes literally an old item of footwear) around the hook's handle, secured through the toe at the notch, and at the boot's heel with a ring on the end of the hook's tang - which tends to explain the ring as a feature too. For a good example see page 2 of Devon Hedges - details on my Reading page.

This is a link to a high resolution picture of the SW England maker's marks, in a new window. Note that Finch Bros. stamped their tools upside down. 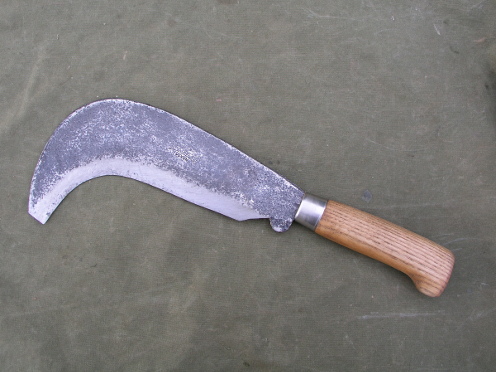 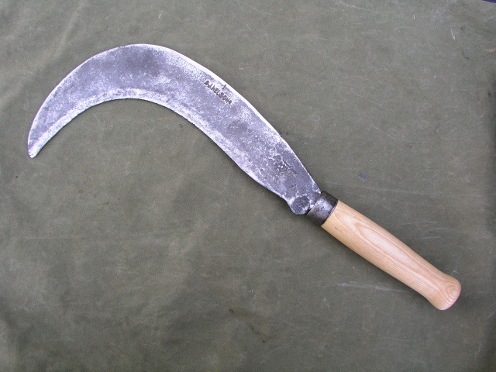 J. Helson, Dunsford, Devon. The Helsons ran Dunsford forge before Morris family took it over, and J. Helson was the son of the original encumbent, so I would date this tool roughly to the end of the 19th C. A very pronounced nose on this billhook, and not a shape used much any more, I feel! 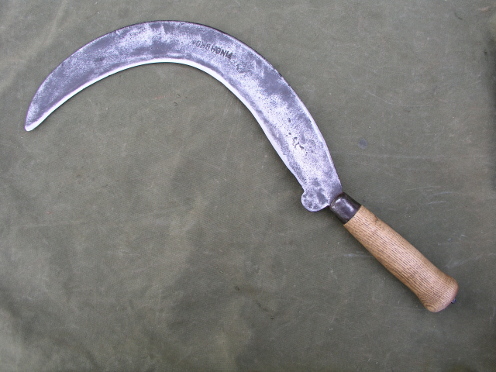 Finch Bros, Sticklepath, Devon. Finch Brothers ran the Finch "Foundry" in Sticklepath, making edge tools and mining equipment. No foundry work was carried out there as far as I know. You can visit the site, as it is preserved by the National Trust. This tool is not a billhook, but a Browse Hook. Wider and heavier than a grass/fagging/bagging hook (which are on the face of it similar in shape), and so good for cutting heavier material. Once again, not a pattern of tool that is used much any more. My understanding from the name is that the tool may have originated from the old practise of cutting green leafy material from hedges as animal fodder, i.e. browse. 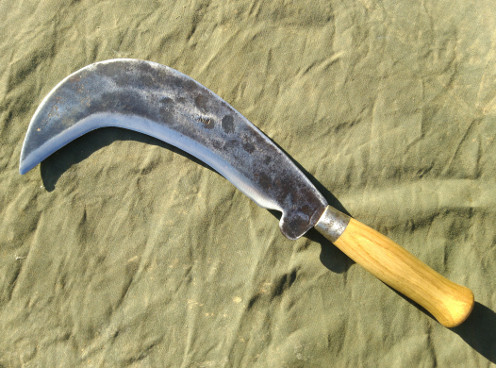 Finch Bros Half Turn Hook. Much like those from other local makers, but with a sharp point on the nose - although this maybe due to wear and sharpening.. These were available with this style of handle("Plain"), or a "Knob" handle, also referred to as caulked. 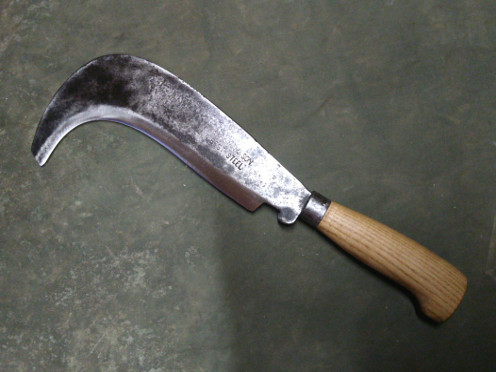 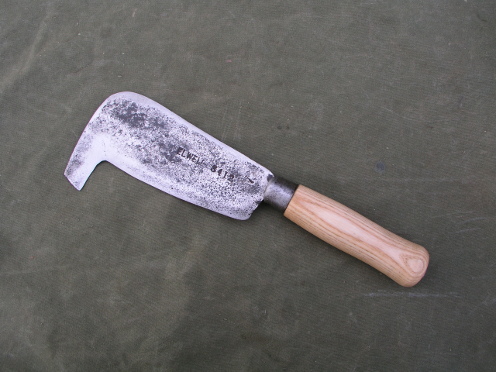 Elwell 3412 Patch Hook. Of course the big manufacturers from the Midlands catered for the South West tool buyers too. This is a Devon Patch Hook, made by Elwell of Wednesbury. It is a broad bladed spar type hook with a blunt ended beak - what its traditional use was, I'm not sure - doesn't look ideal for spar making. 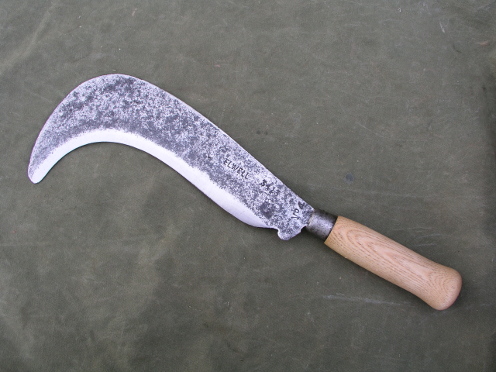 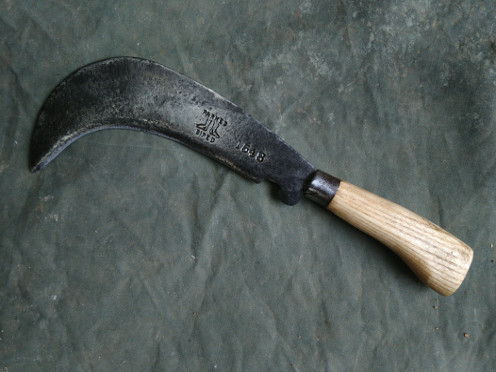 Parkes Biped 1548 Devon Billhook Another Midlands manufacturer's version of a Devon hook, a light one, and with a sharp point rather than the clipped off bill end.

If you have information or memories about edge tool makers in South West England I'd be delighted to hear from you!

See also: photos of billhooks made by manufacturers in the Midlands and photos of handbills made by edge tool makers in the Weald.